The up-and-coming professional football player Chris Borland, of the San Francisco 49ers, is now leaving the sport out of concern that a career in football would increase his risk of brain disease. But what types of neurological problems have been linked with football, and how might these arise?

On Monday (March 16), Borland announced he was retiring from football after studying the link between football head injuries and degenerative brain disease, and discussing his decision with friends, family members, concussion researchers, and teammates, according to ESPN.

The NFL is doing what it can to solve its head trauma issue through an ongoing evaluation and revision of its rules. Rules are changing regarding definition of “vicious hit,” and guidelines are being adopted to protect players, both offensive and defensive.

But certainly, one aspect of the game that must change, especially for younger players who haven’t yet learned to protect themselves, is the design of the helmet, which must be better able to absorb an impact from other players or the ground.

Several companies are working on designs to mitigate head impacts.

University of Michigan researchers have entered the race to build a lightweight, more affordable and more effective football helmet, with a system they’ve called Mitigatium. The design incorporates three different layers that are meant to blunt some dangerous physics that today’s helmet designs ignore.

According to the researchers involved in the project, current helmets do a good job of preventing the peak force of an impact that can cause skull fractures, but they still let the brain dissipate the energy created by that hit.

The University of Michigan researchers are focused on creating a helmet that absorbs the negative effects of impulse –- the secondary effect of an initial force or hit that may be the cause of brain injury in football players. They explain that impulse is what gives objects momentum and energy. Given the speed and weight of current football players, helmets need to be designed to block or reduce the forces of both impulse and impact.

In developing their prototype, the researchers found studies from 70 years ago that blamed impulse for damage caused by the quick, hard hits sustained in football. Yet, the results of those studies don’t seem to have made it into the long-standing designs used today.

The three layers within the Mitigatium (seen above) include an initial layer of hard polycarbonate similar to what is used in helmet shells today, a second layer consisting of a flexible plastic, and a third layer that is described as having the consistency of dried tar. The first two layers work in tandem to reflect most of the initial force or incoming shock wave, while the third layer dissipates that force to reduce it even further. The overall effect is reduced impact to the brain.

There’s no indication as to when a helmet using Mitigatium might be put into production, since more studies and research must be completed. Other universities and companies are engaged in similar projects, including the University of Washington with its Zero1 helmet and Riddell’s Speedflex that was introduced in 2014.

Featuring an outer shell that yields upon impact like a car bumper, the Zero1 helmet is expected to be available to select NFL and NCAA football teams this spring and be worn in the 2016-17 season. 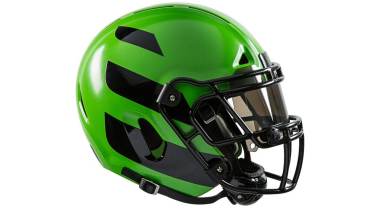 The Riddell Speedflex is designed with “crumple zones,” which will protect a player’s head upon impact. It is now generally accepted that it’s safer for vehicles to feature impact-absorbing crumple zones. With that in mind, that’s what Riddell’s new SpeedFlex helmet does … Just to be clear, the SpeedFlex doesn’t actually crumple under pressure. It does, however, have a built-in hinged rubber-padded panel located on the front near the top. In head-on collisions with other players (or the ground), this panel gives by up to a quarter of an inch (6 mm), helping to absorb the impact.